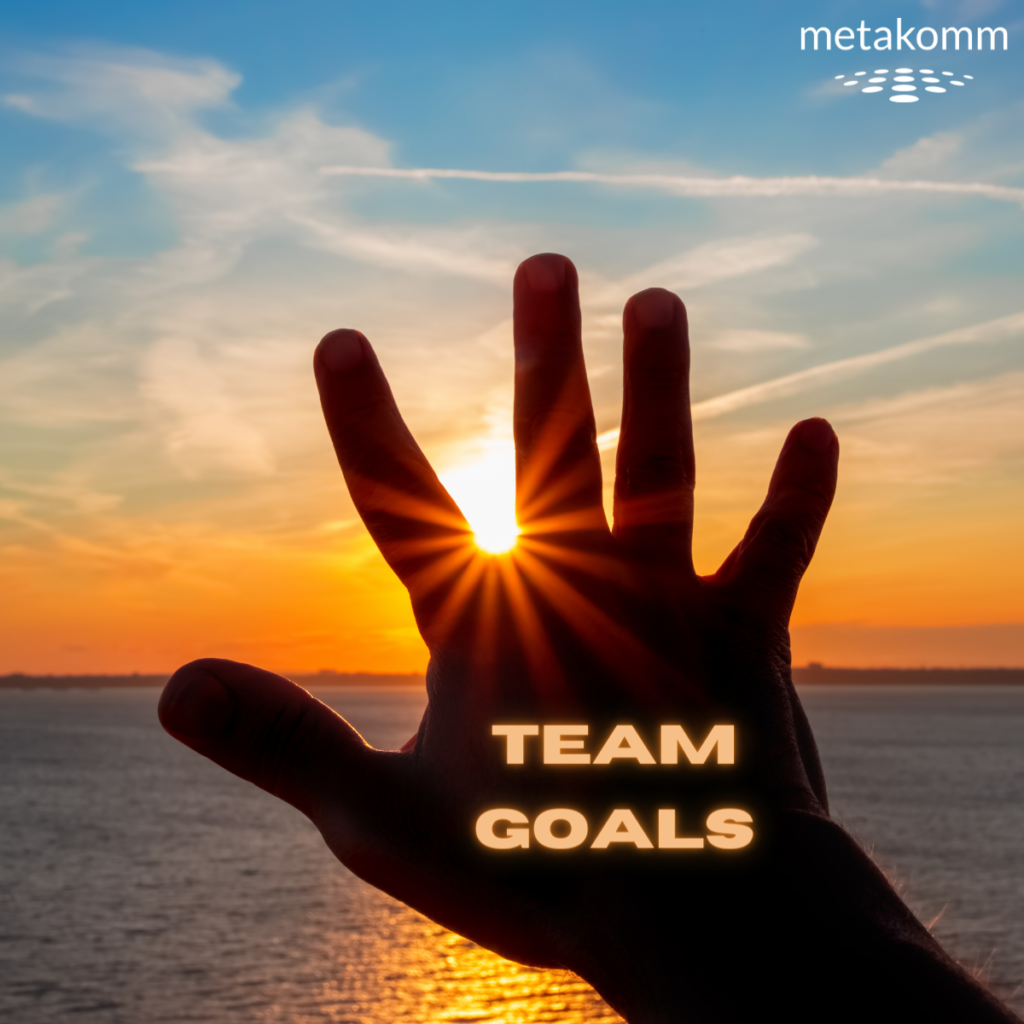 Agreeing on team goals that the team really wants to achieve
What are benefits of team goals? What benefit do successful team goals bring?

A hallmark of teams is that they work together on the same tasks. These tasks could also be described as common team goals. The goal is to achieve them as a team.
In this article, I want to talk about specific development goals that teams set to improve and evolve. Own team goals motivate and promote team communication.

However, my clients’ enthusiasm for setting team goals is mixed. Some have been working with team goals for years. With others, there are occasional attempts to introduce team goals that don’t quite succeed. Still others consistently reject specific team goals. Explanations being held accountable for not achieving common team goals include team goals being unfair to individual achievement possibilities, a difficulty to measure them, or team goals being too imprecise.

What are benefits of team goals? What benefit do successful team goals bring?

If there are so many benefits of working with team goals, why don’t they work optimally across teams?

When and how do team goals work poorly?

The goals are distributed to the team from the top down by those responsible. The team members have no say or decision-making power.
Identifying with goals set by others is difficult for many. Even more so, when the goal consists of pure communication and the goals are not even discussed with one another. Having to pursue goals that you have not set yourself, that you may not have contented with, is not particularly motivating.

In many companies, very similar goals in regards to the ones that have been made in the past are agreed upon every year. They are related to the typical problem areas in the team, e.g. one could react faster to customer inquiries, fewer mistakes could be made, etc.
If the goals do not pose a challenge, but only describe the team’s obvious tasks in a somewhat reworded form, this usually causes the team members to nod appropriately: “Of course we always want to offer high quality”. After that, things continue as before.

Targets are still often agreed upon at yearly intervals. They are often outdated after just a few months, sometimes even weeks, and afterwards forgotten.
Tasks, the composition of a team and the orientation of the company are changing in ever shorter cycles these days.
The long-term nature of the goals also affects the way in which the goals are formulated. Because the knowledge that the goal “must last” for a year and that it is reasonably suitable for a whole year usually makes the formulation general and vague.

If a goal is set in such a way that within the team the individuals have different shares in achieving it, the feeling quickly arises that this is unfair. If the goal is then achieved, those who were really involved feel that they have “fed the others through”. If the goal is not achieved, those primarily responsible are being made the culprits.
If, for example, the goal is an increase in sales and some team members have no direct influence on it in their work, they cannot actively contribute to the achievement of the goal and are still measured against it. That demotivates.
Instead of unity, the team goal then brings competition or distancing.

This becomes particularly critical when a direct reward or bonus is linked to the achievement of the goal. Then the team members may behave strategically to get the reward. Those who are particularly ambitious then focus very closely on the relevant tasks and look less to the right and left. Space for innovative ideas and the often desired “thinking outside the box” will be difficult to create. If they already “have the goal in their pocket”, they no longer retain their motivation.

Vague goals do not provide a measure of goal attainment. Often there is no termination. When exactly should the goal be reached? What is the exact difference to the status quo? How can I determine the achievement of goals? Less specific wording results in less liability. In the broadest sense, I can then reach my goals more quickly, but a real improvement has then happened in the rarest of cases.

How do I agree on good team goals?

There are proven and tested methods for formulating goals. I recommend two in particular:

The goals are formulated smartly.
That means:

S – The goal is specifically formulated.

M – It is measurable by defined criteria.

A – It is demanding and challenging and accepted by all.

R – It is realistic, i.e. the team has the power to achieve the goal completely through their own performance.

Not only should the goals themselves be formulated, but also measurable steps on the way to achieving them. A reference to the OKR method, which has been making a name for itself since it was introduced by Google in 2002, can be helpful here. Some principles of goal setting can also be applied to goal setting in teams.
OKR stands for Objectives and Key results, i.e. goals and key results. The “What should be achieved” is supplemented by several “What do we have to do to get to the what”.

For the goal: “We improve our telephone availability for the customer by 10%”, key results could be formulated as: “We measure the exact factors for the current poor availability over a period X.” “We introduce a ring circuit among the colleagues” or “Customers are given the opportunity to be called back promptly.”

Team goals should be developed by the team itself, reviewed and renewed in short periods of time and be in direct alignment with the current company goals. The team members identify with them more strongly than if they are specified.
If the goals are formulated specifically and smartly, they can be implemented more easily and successfully.
And last but not least, the regular exchange about the goals and the successful achievement of the goals strengthens team cohesion and pride in one’s own team.

Do you want to work with your team on team goals?
I would be happy to support you, you can reach me best here